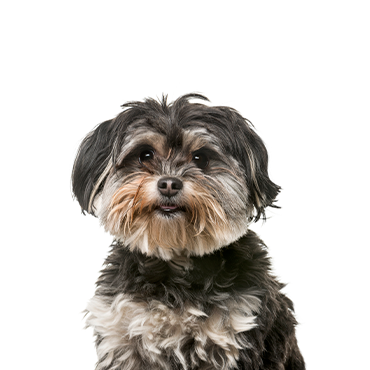 Shih Poos are designer dogs that are a cross between the purebred Shih Tzu and the purebred Poodle. Shih Tzus are believed to have originated in Tibet as early as 600 AD. They are also considered one of the oldest dogs in existence today. The Poodle was first bred in Germany and has served as a water retriever for hunters. Their alert minds mind allows them to be considered one of the most intelligent dog breeds that exist today. Shih-Poos originated about the same time as most other designer dogs, which was in the late 1980s.

The Shih Poo’s personality is an even mix of his parents’ personalities. They are smart, loyal, alert, and dedicated dogs that have pleasant personalities and kind temperaments. Shih-Poos make marvelous companion dogs and fit in easily with families that have children and other pets in the house. They also adapt well to apartment-style living or conventional housing. This breed is very well-liked and will make a great fit in any family.

Shih Poos are found in many colors. This includes apricot, black, tan and black, brown, cream, red sable, and white. In some instances, puppies from the same litter can have significantly different colors and types of coats. Some inherit a wool coat from the Poodle or the longer and straighter coat of the Shih Tzu. Thanks to their hypoallergenic coats, they do well in families that have people who suffer from allergies. Routine daily brushing is a good way to keep this dog looking his best. A bi-weekly bath is also suggested, as is routine teeth cleaning.

Keeping your Shih Pooh puppy well-fed is very important. This breed is known to have hypoglycemia, which is low blood sugar levels. To keep this puppy feeling his best, feed him smaller meals four to six times a day up until the age of six months. After reaching the age of six months, two meals a day spaced apart in twelve-hour intervals is fine. It is also important to brush his teeth at least three times each week. This is a very good way to prevent health issues down the road. Another recommended tip is to make sure his nails are clipped on a routine basis. This will allow your puppy to feel great.

Fact: The Shih Pooh gets along well with other pets in the home. Even cats!

Petland is honored to offer the highest quality Shih Pooh puppies who will be an instant in your family.