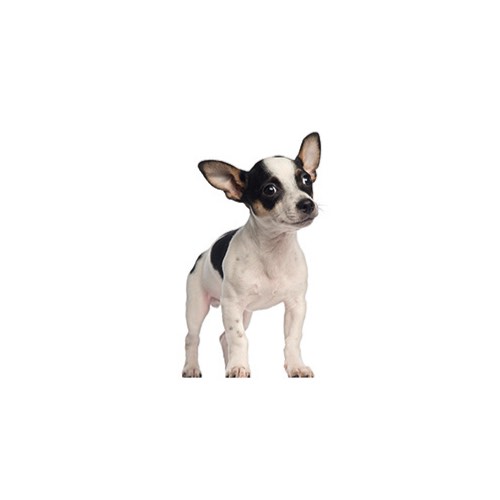 The Rat Terrier is a multipurpose companion dog that is capable of hunting rodents and vermin above and below ground as well as coursing small game. He is a sturdy, compact, small-to-medium sized parti-colored dog giving the appearance of elegance and athleticism. His short, smooth coat may come in any variation of pied patterning. Pied is described as comparatively large patches of one or more colors in combination with white. Acceptable colors, with or without “tan points”, include the predominate black, or chocolate, red, apricot, blue, fawn, tan, or lemon.

An American breed, the Rat Terrier was created by immigrants using a mixture of crosses of old time Fox Terriers and other European Terriers common in the 19th century; the Old English White Terrier, Manchester Terrier, Bull Terrier, etc.; and??later more Smooth Fox Terrier, Beagle,??Toy Fox Terriers, Whippets and Italian Greyhounds. From 1910 through the “dust bowl” era of the 1930s, the Rat Terrier was one of the most common farm dogs, used for ratting, hunting varmints and other work.

This loyal, active and playful breed??is at its best as??a??member??of its??human??family, but may be reserved with strangers. Intelligent and trainable, many Rat Terriers excel in Agility and Obedience, events which also serve as excellent exercise outlets. The breed sheds seasonally and requires brushing with a soft brush or rubber curry mitt.