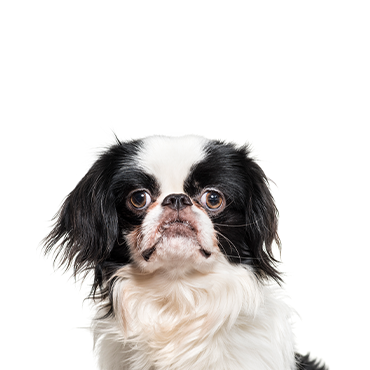 The Japanese Chin which is also known as Japanese Spaniel hails from Asia and has been classified as a companion for over a thousand years. It has distinctive heritage and serves both as a lap dog and companion dog. The Japanese Chin was refined and got its distinct look in Japan. Discover more about our Japanese Chin puppies for sale below!

This small and well-balanced breed is believed to have originated from China and was given as gifts to the emperor of Japan. Its name was changed from Japanese Spaniel to Japanese Chin in the year 1977.

It is assumed that the Japanese Chin was crossed with small spaniel-type dogs to achieve the look it has today. This breed was regarded as a separate being and not as a dog; it is a unique breed that is owned strictly for companionship.

A unique fact about the Japanese Chin is its ability to shape its personality around its environment because of its sensitivity.

This breed has a very amicable and gentle temperament and is also self-confident and highly intelligent. As a result of its sensitive temperament, it can sense its owner’s mood and change its own mood to match. The Japanese Chin is known to be alert, friendly and loyal.

The small size of the Japanese Chin makes it a suitable apartment dog; it is not one to be separated from its owner as it craves companionship and could suffer from anxiety when left on its own. The Japanese Chin can also adapt to any living situation; if it lives in a quiet home, it has the tendency to become reserved and vice versa.

When exercising the Japanese Chin, note that if you get bored along the way, it will also become bored hence exercise won’t be fun anymore.

The best way to exercise this breed is to create an active mood for the exercise. It requires a lower amount of exercise due to its size, unlike other dogs; a daily walk and play in the yard would do.

The Japanese Chin has an easy to maintain the coat, brushing sessions once or twice a week would do the magic as it has no problem with tangles.

It is a tidy dog by nature and licks itself clean so bathing is only required every 3 to 4 months or whenever it gets dirty or begins to stink.

Special attention should also be given to its skirt and the area under the ears and legs. The face should also be occasionally wiped with a damp cloth.

The unregulated breeders who are selling outside of the USDA regulations and without a license are what we consider to be “Puppy Mills.” We are committed to offering Japanese Chin puppies who will grow up to become important members of your family. We only purchase puppies from the very best sources, and we stand behind every puppy we sell.

Can a Japanese Chin Swim?

No. The Japanese Chin is a brachycephalic breed which makes breathing while swimming a great difficulty. Its long hair can also weigh it down and its small body can catch a cold easily.

How much food should a Japanese Chin be fed?

The Japanese Chin has very little room as it only grows to weigh about 10pounds, too much food can make it become overweight. For a Japanese Chin, 1pound equals 10percent of its normal body weight.

How many puppies can a Japanese Chin have?

On average, the Japanese Chin can birth up to 3 puppies. It also requires a lot of attention during pregnancy.

Is the Japanese Chin an affectionate dog?

Yes. Japanese Chin is loving, caring and highly sensitive. It loves to give out affection and give it in return and will always cuddle and snuggle all day if allowed.

Why does a Japanese Chin spin?

This adorable dog has a unique habit that is spinning, sometimes called ‘the chin spin.’ The Japanese Chin spins around in circles, often on two legs when it is exciting.

How long does a Japanese Chin live?

The Japanese Chin has a lifespan of about 10 to 12 years but few can live as long as 15 years with proper care and attention.

Does the Japanese Chin have breathing problems?

The short and flattened face of the Japanese Chin makes it prone to heart and breathing problems. Some symptoms to be aware of are coughing, difficulty breathing, shortness of breath, weight loss and fatigue.

How much does a Japanese Chin cost?

Depending on the pedigree of the puppies, the average cost of a purebred Japanese Chin from a reputable breeder is between $1,500.00 to $2,500.00.

Where did the Japanese Chin originated from?

Just like the second part of its name, the Japanese Chin originated from China.

What colors do Japanese Chins come in?

If you’re in need of a dog who is a constant companion, the Japanese Chin is the right dog for you.