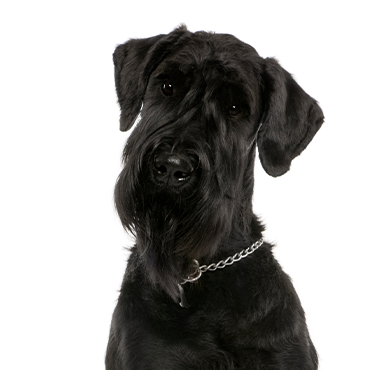 This working breed developed in Germany in the 17th century is the largest of the three breeds of Schnauzer which include Standard Schnauzer and Miniature Schnauzer. Discover more about our Giant Schnauzer puppies for sale below!

Its development came about through the combination of other breeds such as German Pinscher, Great Dane, Bouvier des Flandres amongst others. It became popular as a military dog during World War I and World War II.

The first of its kind emerged in the German state of Bavaria, in Swabia. Originally, it was bred as a farm dog used for guarding property and driving animals to the market. By the 20th century, it was being used as a watchdog at factories and a couple more places.

Giant Schnauzer is quiet by nature although it has a tendency to be aggressive. Being an intelligent breed, it can easily get bored, which can lead to destructive behavior. Its temperament is well suitable for families with an active lifestyle and older children.

The Giant Schnauzer is a breed with incredible mental dexterity and craves exercise. It thrives well in an environment where the family will be able to spend ample time with it. The breed does better in a large environment where it can play in; it is not recommended in environments with young children.

Being highly energetic, the Giant Schnauzer requires not less than two long walks daily, but in cases where it cannot be taken for a long walk, vigorous backyard exercise should be done for at least 30 to 60 minutes daily.

The Giant Schnauzer has minimal shedding ability hence it needs regular attention to remove dead coat from its body. It is recommended to take this breed to a groomer approximately every 6 to 10 weeks in order to maintain its looks. On the other hand, the owner can learn the act of proper grooming as this increases the bond between dog and owner.

The unregulated breeders who are selling outside of the USDA regulations and without a license are what we consider to be “Puppy Mills.” We are committed to offering Giant Schnauzer puppies who will grow up to become important members of your family. We only purchase puppies from the very best sources, and we stand behind every puppy we sell.

Does the Giant Schnauzer shed hair?

Giant Schnauzer does not shed a lot of hair hence requires extra grooming care, this shouldn’t be a difficult task if its owner can learn to do it properly.

Can the Giant Schnauzer be easily trained?

This highly intelligent dog can be a handful for some households however; it is very obedient when trained fairly and consistently. You can always train your Giant Schnauzer to respect you and by so doing, avoiding some negative traits.

Does the Giant Schnauzer do well with socializing?

Like most other dogs, the Giant Schnauzer has a natural protective instinct towards strangers. Exposure is required to enable this dog to become more people-friendly. In the absence of socialization, it may grow to become suspicious of everyone thereby leading to aggression.

Is the Giant Schnauzer a good guard dog?

Is the Giant Schnauzer good with children?

The Giant Schnauzer is not recommended for houses with little children because of its size and forceful behavior. It can display aggressiveness towards people and animals it is not familiar with.

Can the Giant Schnauzer be left alone?

This breed is an independent dog and can do well all by itself for a couple of hours if properly trained. However, it is not advisable to leave it alone for too long as it requires the company of its owner.

Is the Giant Schnauzer friendly with cats?

Does the Giant Schnauzer bark a lot?

Yes. The Giant Schnauzer is a very noisy dog and finds expression in its voice; it does this by barking really loud. Sometimes it barks just to get the attention of its owner and other times, it barks while guarding its territory.

Does the Giant Schnauzer drool a lot?

Although not an excess drooler, it drools when it is excited and also when in need of food from family members or just finished eating. Aside from this, the Giant Schnauzer is not a heavy drooler.

What is the lifespan of a Giant Schnauzer?

On average, the Giant Schnauzer’s lifespan is between 10 to 12 years. This can increase with adequate care.

If you want a dog that is athletic, does not shed much hair, plays hard and enjoys vigorous athletic activities, then the Giant Schnauzer is the right breed for you.