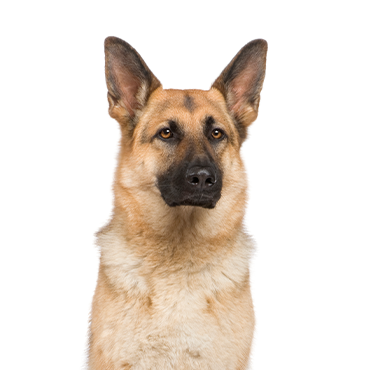 The German shepherd, formerly called ‘Alsatian Wolf Dog’ in the UK, is a type of breed of dog that originated as far back as the 18th century. It is a medium to large-sized dog very well known for its strength, trainability, and intelligence. It has been famously used in disability assistance, search-and-rescue missions, police/military roles, thus it belongs to the “working- dog group”. Discover more about our German Shepherd puppies for sale below!

In the 19th century, Shepherds bred all kinds of dogs mainly to herd and guard flocks. Thus, the dogs needed to display a high level of intelligence, extra normal strength, resilience, courage and bravery, a keen sense of smell, and trainability qualities, etc.

These mongrel combinations provided dog breeds that could efficiently guard and herd flocks but differed in appearance and ability, from one locality to another.

Max Von Stephanitz an ex-calvary captain and ex-Phylax Society member (a society create solely to standardize dog breeds) attending a dog show in 1899, acquired a dog after being enthralled with the dog’s magnificence, strength, and intelligence and called the dog Horand von Grafrath.

This particular breed was originally named Deutscher Schäferhund by von Stephanitz (which translated means “German Shepherd Dog”). The name was coined from the breed’s ability to assist shepherds on herding and guard duties.

It was general thinking in some parts of Europe (especially in the UK) that the word ‘German’ in the breeds original name would decline the breed rising popularity due to the role that the Germans played during the world and for this reason, the breed was renamed ‘Alsatian Wolf Dog’.

The breeds’ original name “German Shepherd” was officially restored in 1977.

German Shepherd dogs are well known to be highly inquisitive which makes them excellent for rescue mission training. The German Shepherd has been described as Confident, Courageous and Smart.

The German Shepherd has a noble character and shows very high levels of loyalty to its owners. The dog is also described as extremely territorial and has displayed characteristics of overprotectiveness in some cases.

If the German Shepherd isn’t trained in a social circle, it can and will show extreme aggression towards strangers.

The German shepherd can survive in all types of environment; their thick furriness makes them better prepared for cold climates. The German Shepherd needs space for plenty of daily exercises so confining the dog in a tight place isn’t necessarily good for the dog.

German Shepherds are considered extremely playful and active. These breeds spend half of their daily routine with activities.

The German Shepherd is popularly known as an athletic natured dog and requires a good dose of daily exercise to keep up muscle tone, build and development.

If improperly exercised the German Shepherd has been known to become frustrated and exhibit undesirable behaviors.

The German Shepherd occasionally requires that its nails are trimmed off when they grow too long, however, some breeds instinctually file their nails against any hard surface that can be fine.

Excessive nail growth can cause much pain and even lead to structural concerns. It’s imperative that if overly long nails are observed they are trimmed immediately.

It isn’t required that the German Shepherd baths every day, however once a week to twice a month at least would suffice in keeping the dog clean and healthy. In choosing a German Shepherd breed you must ask yourself what it is you want in a dog and what kind of person are you?

Considering the breed’s high levels of intelligence, it’s unquestionable loyalty, trainability, and the dog’s prowess; the german shepherd has proven to be a good breed to double as a guard dog and friendly companion.

The unregulated breeders who are selling outside of the USDA regulations and without a license are what we consider to be “Puppy Mills.” We are committed to offering German Shepherd puppies who will grow up to become important members of your family. We only purchase puppies from the very best sources, and we stand behind every puppy we sell.

Q1: How long do German Shepherds live for?

A: Healthy German Shepherds live for as long as between nine to thirteen years, however, some german shepherd has lived much longer than Thirteen years.

A: An adult German Shepherd can run approximately 30miles per hour.

A: Originally the German Shepherd was bred for guarding and herding of flocks. The German Shepherd dog is highly intelligent and a fairly quick learner and that is why Police and Military institutions use them in operations.

Q4: What is the perfect diet plan for my German Shepherd dog?

A: The German Shepherd must get all required nourishment in its daily meal, which includes all types of animal protein (this enables muscle development and growth), Calcium-rich food, MultiVitamin supplements, and glucose water. Real meat, bone and organ meat (liver, heart, kidney) is the best food for your dog.

Q5: How do I care for a German Shepherd dog?

A: The German Shepherd sheds lightly all through the year so be sure to brush it at least twice weekly. Bathe it after each shedding season. Brush its teeth at least once a month. Feed with healthy meals. Routine exercise of at least 45 minutes each day is crucial to the existence of a German Shepherd.

A: Yes, German Shepherds sheds heavily all year round and blows the thick, dense fur under its harsh topcoat twice a year.

A: German Shepherds are good with kids, however, they can become very protective because of this adult supervisor is highly recommended.

Q8: At what age are German Shepherds fully grown?

Q9: Why do German shepherd ears stand up?

A: During the early puppy age (0-20weeks) German shepherds have floppy ears but this usually becomes pointed ears, standing up due to the cartilage in the ear becoming hard and strong thereby making the ears stand permanently. The standing ears also help in improving the breed’s sense of hearing.

A: It’s difficult to tell which gender shows more affection; however, it is safe to say that the female can show more affection due to her sense of family grooming (i.e. her ability to raise her own puppies with affection).

The female may also be less tolerable than the male when it comes to playing with children. In choosing a German Shepherd breed you must ask yourself what it is you want in a dog and what kind of person are you?

Considering the breed’s high levels of intelligence, it’s unquestionable loyalty, trainability, and the dog’s prowess; the German shepherd has proven to be a good breed to double as a guard dog and friendly companion.