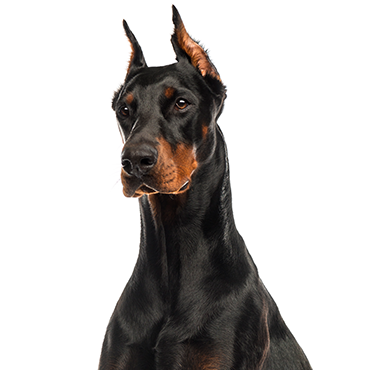 This medium-large domestic dog breed is a highly intelligent dog with elegance and proud demeanor. The Doberman Pinscher is powerful and energetic with a sleek coat and athletic build. Discover more about our Doberman Pinscher puppies for sale below!

The Doberman Pinscher, also known as a “Dobie” or “Doberman” was first bred in the 1880s by Karl Friedrich Louis Dobermann in Apolda, Thuringia, Germany who was a tax collector who ran the Apolda dog pound. This breed was designed to be a guard dog who is alert and protective. Today’s Doberman Pinscher does make a great family pet, however, should be trained at a very young age. This is a powerful breed of dog that does best with dog owners who have previous dog handling experience.

The Doberman Pinscher is a very alert, loyal, and caring dog. They certainly enjoy the attention of their families. They tend to quickly warm up to those they love and form a strong bond. This is also an inquisitive dog that enjoys exploring the outdoors and is happy to take on any adventures with his family. Many Doberman Pinscher owners would say that this breed is happy when they are.

The Doberman Pinscher is a fairly easy dog to care for. This breed does well with a daily brushing and a warm bath every five to six weeks. It is also important to remember to include trimming this breed’s nails on a routine basis. This will help your pup look and feel his best at all times.

Doberman Pinschers are active dogs and do need ample amounts of energy to look and feel their best. The correct ratio of meat-based protein and micronutrients, as well as healthy carbs and fats, will keep this breed healthy. Many Doberman Pinscher owners recommend feeding this dog two meals a day, spaced about twelve hours apart. It is also very important to remember to provide your dog with proper dental care. It is suggested that his teeth get cleaned a minimum of three times a week. Failing to keep his teeth clean can contribute to health issues.

The Doberman Pinscher stands between twenty-four and twenty-eight inches tall.

This breed weighs between seventy and one hundred pounds.

The average life expectancy for this breed is between ten and thirteen years.

Fact: The Doberman Pinscher was initially designed to serve as a guard dog.

Fact: Despite this breed’s short and neatly kept coat, they are not considered hypoallergenic.

Fact: This breed is very alert and known to be protective of his family.

Is the Doberman Pinscher easy to train?

One good trait about the Doberman Pinscher is its high intelligence; this makes it quite easy to train. They require short training sessions daily and although they can prove quite difficult sometimes, they learn very fast thereby making training quite easy.

What is the Life Expectancy of a Doberman Pinscher?

The Kennel Club conducted a UK Health Survey in 2004 and deduced that the median life expectancy of the Doberman Pinscher is 10 years and 6 months. According to the survey, the oldest Doberman to have lived was 16 years and 6 months old.

Can Doberman Pinscher be used as an Apartment Pet?

A Doberman Pinscher will make a good apartment pet if it is properly trained and exercised daily. Considering the fact that it is not a loud barker, it will do just fine living in apartments.

How Does Doberman Pinscher Show Affection?

Is the Doberman Pinscher Aggressive?

Doberman Pinscher has a natural intuition to protect the people it loves however; this cannot be termed as aggressive as the Doberman is not an attack dog.

This differs based on the dog, while some might like to cuddle, others might not. The average Doberman likes to cuddle by placing its head between a person’s knees.

How often should the Doberman be fed daily?

Unlike other dog breeds, the Doberman requires a higher level of fat and protein throughout their lives. Depending on metabolic rate and daily activity, an average adult will require between 2 to 5 cups of food daily.

What human food can a Doberman be fed with?

A Doberman Pinscher can be fed human food such as meat source and grains. These include sweet potato, chicken, beef, brown rice, etc.

Does the Doberman Pinscher Need Haircuts?

The Doberman requires little grooming however, it should be brushed occasionally with a rubber brush to reduce shedding and also help to retain the natural sheen in its coat.

At What Age is a Doberman Full Grown?

Petland is honored to offer first-class Doberman Pinscher puppies and our caring team of puppy specialists will help answer any questions you may have.