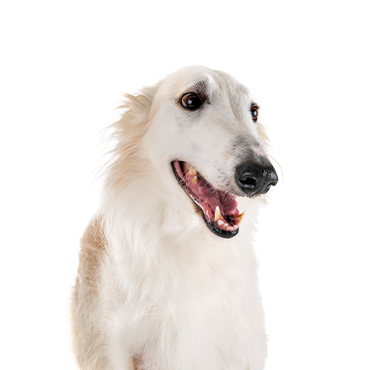 This dog breed among other things is known for its looks. There are days you could even mistake it for a cat but its chase will definitely change your mind. They are mostly used for glam modeling but they could make great companions too. Discover more about our Borzoi puppies for sale below!

Originally called the Russian wolfhound, this dog breed has incredibly grown and evolved over time. The name borzoi was subsequently adopted and it was known as a royal dog, one adapted for the kings and queens.

They were given out as gifts to many royalties and this is what enhanced their longevity. Their hunting skills are impeccable as they were made to join hunts. This breed experienced a setback during the Russian revolution but they are slowly stealing back the spotlight.

The borzoi is easy going and has a gentle spirit. They are quite affectionate and very friendly too. Their reaction to strangers could be friendly and may also be aloof depending on the circumstances. They really do not like to be left alone.

They may be a tad difficult to train and you’d need a lot of patience with them. They could be friendly with children but since they are known to bite at the slightest provocation, such moments should be supervised. They, however, need to know that they are loved and won’t be put to any harm.

Given the fact that they have hunting instincts, they should be kept in fenced yards. They are likely to go off if they see a running cat so it’s best if they are kept in controlled environments.

They are big dogs and not so tolerant either so they would be suitable for homes with bigger children as they won’t be so appreciative of a toddler who pokes them. They seem to be friendly with other dogs too except when the sighthound instinct is triggered.

The borzoi dog breed is classified as energetic and would need their fair share of exercise. Since they are sighthounds, it is advised to keep them contained as they seem to chase anything that moves however small. Some time in an enclosed yard should do the trick. They could run around or play fetch.

They are good house dogs and shouldn’t be allowed to go out without a leash. You could also take them on walks but they’d have to be on a leash so they do not venture off.
Grooming

The borzoi has quite the coat. You would need to brush it’s coat regularly say 2 to 3 times a week. Since it sheds in season, be sure to brush him more at that time. Bathe him as frequently as it is needed and be sure to take out any matting that may occur behind his ears.

Brush his teeth 2 to 3 times a week or much more often to remove bacteria and to give him fresh breath. If you hear his nails on the floor of the house, they are probably too long and you’d need to cut them.

The unregulated breeders who are selling outside of the USDA regulations and without a license are what we consider to be “Puppy Mills.” We are committed to offering Borzoi puppies who will grow up to become important members of your family. We only purchase puppies from the very best sources, and we stand behind every puppy we sell.

Contact us today to learn more about the availability of our Borzoi puppies for sale. We look forward to helping you find your next family member. Our pet counselors can answer any questions you have about our Borzoi puppies.

Can the Borzoi breed be aggressive?

Usually, borzoi is not known to be aggressive to strangers or other dogs however since they are not known to be slavish in their obedience, they should be socialized early to remove any bouts of aggression.

How long will my Borzoi live?

The average lifespan of a borzoi dog breed is 7 to 10 years.

Are Borzois a healthy breed?

Under normal circumstances, yes, they are. They would need to have regular appointments where they are checked for diseases they are prone to like hip dysplasia, progressive retinal atrophy and since they are big dogs they could experience bloat or other stomach problems. All of these could be nipped quite early before they cause major damage.

Can Borzois live with cats?

Well, they can if they are socialized quite early in their puppy years. You would have to supervise the interaction though. Do not leave them alone with cats or with small children.

How do I care for my Borzoi?

First, you’d need to feed him appropriately and make sure he’s healthy. Then you would need to let him exercise very well so you can avoid bloat or other stomach problems.

Is the Borzoi a good family dog?

Yes. The borzoi is intelligent and very affectionate. They are friendly and love to run around outside but they could be calm and composed inside the house. They should, however, be supervised around little children.

Yes. They have thick coats that shed heavily and in season. You would have to brush them adequately during their shedding season so you get rid of all loose hairs.

You could say the borzois are quite independent and have a mind of their own but they could be perfect apartment dogs and love to cuddle.

Yes. They were originally used to chase down smaller creatures and they could be very fast too. They are also quite responsive to human communication and orders.

Can Borzois live in apartments?

Yes. When completely adapted, they could have the apartment syndrome from lack of regular exercises. Though they can live in such spaces, they should be kept healthy as they could develop problems from the lack of exercise.

Borzois are the classic watch dogs you have always wanted and they could be suitable companions too.