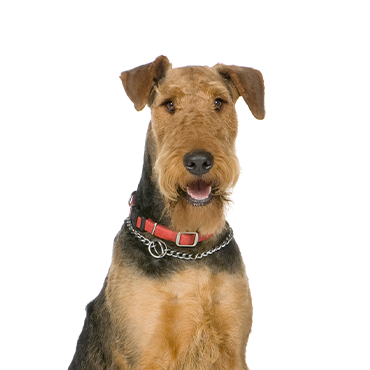 The Airedale Terrier sometimes called the Bingley terrier is another breed from the terrier family. Being the largest in the terrier household earned itself the title “the king of terriers.” A typical kind of versatile dog it is acting as a hunting dog, a farm dog, and a police dog. Discover more about our Airedale Terrier puppies for sale below!

Around the middle of the 19th century, some groups of workers in Yorkshire, England cross-bred the (now extinct) otterhound with the English black, the tan terriers and other special breeds to birth this agile war dog.

The 22-24 inches and 40-100 Pounds terrier made its intimidating entry into England under various names like the waterside, Bingley and the rough-coated but the kennel club of Britain adopted the name Airedale terrier.

The terrier dogs were extremely energetic in hunting skills as they unwittingly hunted out rats from their hiding holes during sporting occasions. Therefore, a need arose for the creation of a terrier dog that will do more than fetching rodents from under-water holes, the result was the crossing of an assorted breed of terriers to produce the Airedale terriers.

From then on around 1880 the Airedale terrier made its first coming into the shores of the United States and got the name Bruce on arrival and again went straight to winning the terrier class prize in the New York show for dogs.

This terrier was one of the most effective dispatchers of mails for soldiers during the world war 1, this some Airedale terriers did amidst injuries. Since then, the Airedale terriers have a secured place as great guard dogs and was acknowledged by the United Kennel Club.

The Airedale terrier is a very intelligent and a smart dog like most terriers and be very strong-willed and stubborn but will cope fine if they are given early training along with the kids, as this is the only way they can get well with children.

They also are friendly with other pets and farm animals, having an origin of a farm animal, they are not a threat to livestock and other little animals, especially when they are properly trained. If not, they may find it hard to tolerate other animals and may constantly irritate them but when it concerns its family, Airedale terriers are very protective of their families and are loyal to their owners. They are a strong, vigorous, resilient, witty and dignifying companion to their owners but a dreadful sight to miscreants.

Airedales are great dogs in houses and apartments but if you are in an apartment, you will need to provide it with lots of avenues to explore and exercise well for proper mental wellbeing. Being an active hunting dog, it requires lots of entertainment and exercises so, having a large farmland or backyard is a huge advantage when an Airedale is at home.

More so, they can live well in some climate conditions but if you are working, an Airedale is not the best option for you because they cannot cope alone and may feel neglected when left alone. This may invite aggressive behavior on the dog and the outcome may not be pleasant.

Regular stimulation is what Airedales crave for most, the kind of dog that you will need to go jogging with every morning or taking on a stroll at the park and also have it play fetch the whole day. If they are not occupied, they get easily bored and this is not helpful to them so, be sure to let your Airedale have some brisk walking for about 20 minutes twice every day to keep your dog glee and vibrant always.

With adequate training and exercises, your dog can live up to 12 years. With that said, if you are a busy one, Airedale is probably not the best dog choice for you, and if you are also a first-timer with dogs, you will have to go with some other dog breed not the Airedale terrier.

If you care about a neat dog, then you will have to give the Airedale lots of regular grooming because they are a breed that requires it. Like most terriers, Airedale does not leave a trail of its fur as it strolls out but you will need to give its coat good brushing 2 to 3 times in a week.

This will help you get rid of the loose hair hanging onto the coat and prevent It from matting, their ears need to be frequently checked and cleared of wax to prevent ear infection. On bathing, Airedales do not ask for much here all they need is just once a month bathing and you will have the freshest dog ever and lastly, Airedales love their teeth to be brushed as often as you can and the nails trimmed often too.

The unregulated breeders who are selling outside of the USDA regulations and without a license are what we consider to be “Puppy Mills.” We are committed to offering Airedale Terrier puppies who will grow up to become important members of your family. We only purchase puppies from the very best sources, and we stand behind every puppy we sell.

Are Airedale Terriers friendly with other dogs?

No, Airedale Terriers are great with other small animals but they are a bit aloof when in the company of other dogs but may get along fine later.

Are Airedale Terriers friendly with children?

Yes, Airedale Terriers love playing games with children, so a good choice for a family with kids.

Are Airedale Terriers friendly with strangers?

Not quite, but if Airedale Terriers receive proper training and socialization they become less uncomfortable with strangers.

Yes, Airedale Terriers can live in both apartments and houses, all you need is to provide it with regular activities so it doesn’t get bored.

Are Airedale Terriers a good choice for a first-timer?

No, Airedale Terriers can be a little stubborn and requires much training that a new owner may not keep up.

How much exercise do Airedale Terriers need?

How much do Airedale Terriers shed?

How long can Airedale Terriers live?

Airedale Terriers can live up to 12 years.